So this is only going to be a tiny blog post but something quite strange happened last week, I hit 1000 followers on twitter, and whilst I am not into counting statistics and all of that, I am slightly stunned by reaching that milestone especially as most of them are law students, legal professionals or academics!

I remember a conversation with @legallybrunette last year on twitter when she reached 1000 followers and it is so strange to have reached that.  I never thought I would ever have that many! 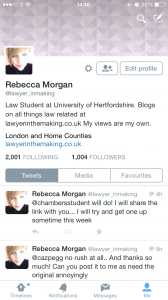 Twitter was something I didn’t really use much and when I got it I totally ignored it for the first year, but after setting up my blog I was advised to start tweeting and safe to say it is probably one of the best pieces of advice I have had!  It has enabled me to network and meet with so many people and opened up plenty of opportunities and I would highly recommend that all law students get on twitter and start following law firms, legal academics, legal professionals…

I personally am not a massive fan of the word networking (I think because you hear so much about it at Uni and the benefits) but twitter really is amazing for networking.

So get involved! Plus there is never a dull day on twitter, and it is also great for legal news and updates, and discussions too!