So today I saw on Facebook (and then on the Middle Temple website) that today 32 Middle Templars have been appointed as Queen’s Counsel in the 2015-16 competition, there were 107 in total. 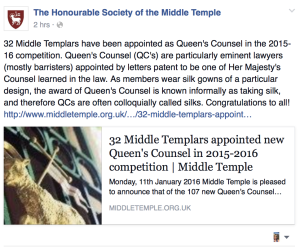 For those of you that don’t know Queen’s Counsel (QC’s) are particularly eminent lawyers (mostly barristers) appointed by letters patent to be one of Her Majesty’s Counsel learned in the law. As members wear silk gowns of a particular design, the award of Queen’s Counsel is known informally as taking silk, and therefore QCs are often colloquially called silks.

These appointments are made by Her Majesty The Queen on the advice of the Lord Chancellor, Michael Gove MP, following consideration by the independent Queen’s Counsel Selection Panel.

The list of Middle Templars, in order of seniority, is as follows:

For other Middle Temple news and posts check out: http://www.middletemple.org.uk