So just over two years ago, the Supreme Court youtube page was launched (they did upload some videos in November 2012 but officially this all began at the end of January 2013), and the aim was to upload videos shortly after the Supreme Court Justices had delivered their judgements in court.

The idea behind this was to enable anyone in the country to watch some of the most important legal rulings as well as show them what it is like in court.  It wanted to extend the audience of those interested in this and make it far more accessible.

The YouTube page came about after the success of the live streaming which Sky News provided, but one downfall to that was that these judgements could not be viewed at a later date.

Having judgments online is especially great for law students, prospective students, legal academics and legal professions but also for anyone that may be interested in certain areas or just wanting to see what it is all about.

The flexibility of YouTube means that you can watch these videos any time, any where and as many times as you like!

So two years on has this been a success…

Well they are still uploading posts to the YouTube site so I would say so… obviously the Supreme Court won’t be getting millions of hits that the now deemed famous YouTubers are getting, or celebrities, but it obviously works and people are checking out these videos! 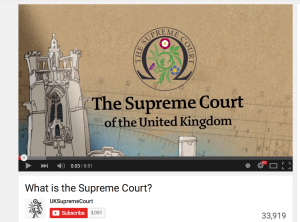 So what is next for the Supreme Court in terms of social media… maybe an App so that you can watch these on the train without internet access, or so those dreaded tunnels on train lines don’t interfere with your viewing?